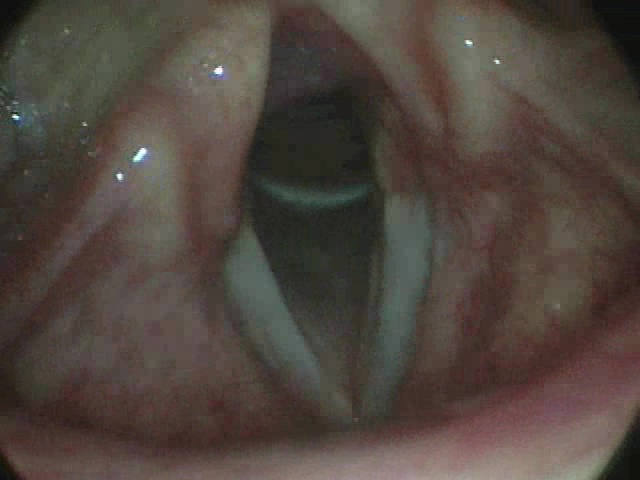 Paralysis of the right vocal fold consequent to thyroidectomy

Four years after fat grafting to the right vocal fold; view during inspiration

Four years after fat grafting the vocal folds can close during phonation. The patient has a normal voice.

Vocal fold paralyses are mainly due to a peripheral lesion of the recurrent laryngeal nerve, which provides innervation to the intrinsic muscles of the larynx (known as voice box). A lesion of this nerve severely impairs the movement of the involved vocal fold. The lesion can be due to several causes such as compression and  infiltration by neck masses, but the most common causes are accidental lesions during surgery on the neck or chest; sometimes the cause of the paralysis remains unknown and might probably be the consequence of viral infection.

The side most often involved is the left one due to the long and complex route of the left recurrent nerve . Injury to the nerve results in a weakened, breathy voice. The effort required by voice production can be so relevant to cause general fatigue due to the respiratory strain necessary to sustain the voice. The patient can experience also a swallowing impairment while respiratory obstructive symptoms are most commonly present only if both nerves are injured.  Voice therapy is the first line treatment  but, if it does not give a satisfying result or if there is a professional and social necessity to regain promptly an efficient voice, then a mini-invasive surgical procedure such as autologous fat injection can achieve a fast and definitive result.

Injection augmentation of the paralyzed vocal fold improves vocal fold closure during voice production, and corrects the flaccidity of the atrophic vocal fold allowing recovery of its vibration in synchrony with the contralateral moving fold.

Over the years several materials have been employed to achieve vocal fold augmentation; non-reabsorbable  implants such as silicone or its derivatives can migrate or give raise to foreign body inflammatory reactions; the reabsorbable  materials such as  collagen and hyaluronic acid do not provide a permanent result.

Since more than 15 years I perform the vocal fold fat augmentation procedure applying the   principles described by Sidney Coleman for esthetic and reconstructive surgery. The fat is taken from the abdomen mini-invasively by liposuction, it is processed and the obtained purified fat parcels are injected in the vocal folds trans-orally under direct microscopic vision. The voice improvement is usually very fast and a reduction in voice fatigue is immediately perceived by the patient.

Several international studies have demonstrated that the regenerative potential of fat injection is mediated by its content in stem cells and growth factors. Therefore this type of operation can be defined a regenerative approach.

This website uses cookies to improve your experience while you navigate through the website. Out of these cookies, the cookies that are categorized as necessary are stored on your browser as they are essential for the working of basic functionalities of the website. We also use third-party cookies that help us analyze and understand how you use this website. These cookies will be stored in your browser only with your consent. You also have the option to opt-out of these cookies. But opting out of some of these cookies may have an effect on your browsing experience.
Necessary Sempre abilitato
Necessary cookies are absolutely essential for the website to function properly. This category only includes cookies that ensures basic functionalities and security features of the website. These cookies do not store any personal information.
Non-necessary
Any cookies that may not be particularly necessary for the website to function and is used specifically to collect user personal data via analytics, ads, other embedded contents are termed as non-necessary cookies. It is mandatory to procure user consent prior to running these cookies on your website.
ACCETTA E SALVA